True to form, our long stint in La Paz didn’t end quite as we expected. We had set up our lease at Casa Republica such that it would end exactly the day the ferry to mainland Mexico would leave. But when we went into the Baja Ferries office we found out that our intended ferry was already sold out, meaning we had to wait another three days before boarding the next available boat. That meant three additional nights in La Paz, but luckily we knew just where to go. We decided to end our stay in La Paz as we started it: at good ol’ Pension California.

Our last day in La Paz was somewhat reminiscent of our initial departure from Seattle. We hadn’t been on the bikes for a long time, our legs were getting squishy, and all of those panniers were looking bigger and heavier than we remembered. With butterflies in our stomachs, we checked out of Pension California and slowly made our way to the ferry terminal in Pichilingue. Given that this was the first time we had been back on the bikes for over a month, it wasn’t so bad. Then again, it was only 10 miles, so you can take that for what it’s worth.

END_OF_DOCUMENT_TOKEN_TO_BE_REPLACED

As some of you may remember, a couple of weeks ago there was the so-called World Cup, a little tournament in an obscure niche sport known as soccer that came and went without many people taking notice. But not in Mexico, oh no. Lucky for us, we had the chance to watch game after game at our favorite local bar, the Fritz. Alex became an avid Mexico supporter after their matchup with Brazil, and then an equally avid Netherlands hater after Robben’s shameful antics that bumped Mexico from the tournament. Tom was a Germany fan all the way, and that worked out pretty well for him.

To get our readers in the mood, here’s the Mexican national soccer anthem (as we know it). This nifty bit of Corona advertising played during every single commercial break, sometimes twice in a row. Soon enough, we were wholeheartedly singing along. We hope that you will be too.

END_OF_DOCUMENT_TOKEN_TO_BE_REPLACED

Anyone who knows us can attest to our love for food. And after more than two months of living on bikes, our clothes were getting more than a little baggy. La Paz is a great place for traditional Mexican fare, something that the two of us gladly took advantage of. While I am satisfied as long as there are huge quantities on my plate (a bad habit from my time as a rower), Alex is a little more refined in her tastes. But before long, it was time for a major event in her culinary evolution. 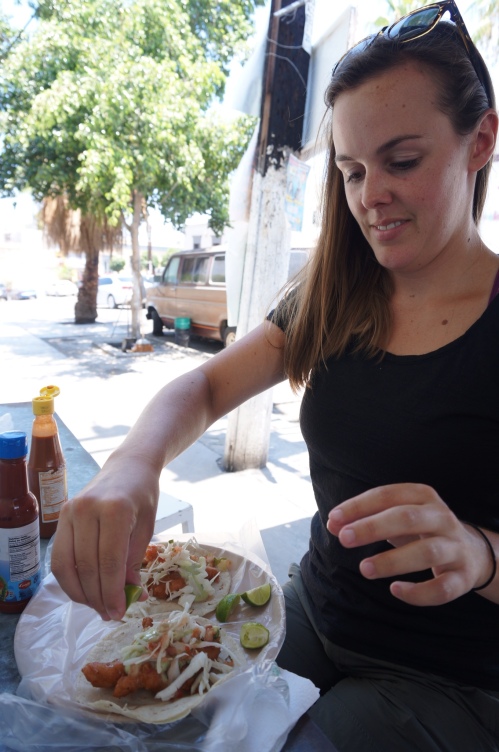 That’s right, those are fish tacos. One too many bland quesadillas drove Alex to the point of breaking.

END_OF_DOCUMENT_TOKEN_TO_BE_REPLACED

We know, it’s been quite some time since the last update. We’ve just been way, WAY too busy sitting out the heat of the day for a whole month. Believe me, nothing is more exhausting than waiting for the temperature to cool down. Nonetheless, here is a little photo summary of our past month off the bikes in beautiful La Paz, BCS.

Instead of spending all our hard-earned pesos on a hotel for a month, we decided to rent an apartment. Casa Republica was nestled into a snug little complex in a residential neighborhood. It had everything we could ask for: laundry, showers, air conditioning, and close proximity to the beach. It also came with a few unexpected “perks,” including warring dogs on either side of us that barked all through the night and day, late night cockroach hunts, and the many chirping lizards that lived in our heat pumps. But all in all, it was a great place to relax and recharge from several months on the road.

Jacques Cousteau marked the turnoff to our street. We took that as a sign that we should spend as much time in the water as possible.

END_OF_DOCUMENT_TOKEN_TO_BE_REPLACED

It’s 9:00AM, and Tom and I are mentally preparing ourselves to board our second flight of the day – from San Francisco back to La Paz. The SFO terminal is mostly deserted, but occasionally a wave of Californians bustles off a red-eye, each sporting a getup that effortlessly exudes casual-chic. In my mind, they’re all headed off to high-paying, fast-paced jobs at Google. Yes, this is ridiculous, but after nearly four months on the road we are decidedly un-hip. Tom would need a once-over with a pair of shears and a lot of hair gel to ever have a chance with those esteemed Googlers. And my new blue raincoat, hiking shorts, and filthy Rainbows basically scream intruder. Not that we ever were hip, but three hours at SFO can really drive the point home.

In addition to our blatant lack of hip, but we have slowly descended into blogging apathy. This is partially attributable to the fact that we’ve been living off the bikes for a month, soaking in the humid heat and beautiful sunsets of La Paz on two feet rather than two wheels. Our day-to-day has been somewhat stagnant, at least compared to the ever-changing scenery of our first two months on the road. But a lot of fun happened too – we got dive certified, the Germans won the World Cup, my Spanish is finally turning a corner. A La Paz post is forthcoming.

And then we absconded back to the Pacific Northwest, where a one week visit stretched out into a two week indulgence. We promised ourselves that we would use at least a few hours of our extra week to get up to speed with the blog. We then managed to use most of those hours enjoying those little pleasures that were unattainable in La Paz: the ability to be outside between the hours of 11:00AM and 6:00PM, a cool breeze, good coffee in the morning, and the easy companionship of friends and family. Long story short, we have a lot to catch up on.

The good news is that we will be back on the bikes on Thursday, bound for mainland Mexico. This means a little more adventure in our daily lives, and hopefully a resurgence of blog-worthy inspiration. In the meantime, we’ve put together a simple map to illustrate our travels thus far (it works better if you view it full screen). We’ll keep it updated in the Our Progress tab up top as we wind our way south!