After a few days in the fanciest hostel we’ve ever stayed in, we saddled up again to head east out of Santa Ana. This time around we got to avoid the highway and instead meandered along beautiful winding back roads, almost completely devoid of traffic. It’s astonishing how much of a difference it makes to not constantly be honked at or passed by cars. At the end of the day we reached the lovely mountain town of Suchitoto, which our reliably unreliable guidebook called out as the go-to retreat for the fancier folks of El Salvador. While there weren’t any particularly thrilling sights from a cultural standpoint, the town’s laid back atmosphere and great street food were more than enough to convince us to hang around for a couple days. We even saw some familiar faces: Niels and Mariyana, the German couple we’d met in Santa Ana! They had passed our sweaty selves on the bus to Suchitoto and we ended up staying hospedaje again. (Guess you can’t complain about $7 per night.) What a very pleasant surprise! 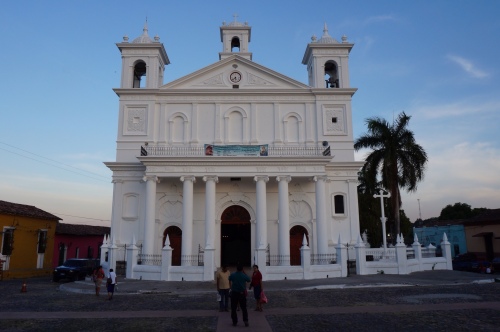 The picturesque plaza central of Suchitoto.

END_OF_DOCUMENT_TOKEN_TO_BE_REPLACED

After a few days of lazy sightseeing in Antigua, we bucked up and set our sights on Lago Atitlán. There is a good reason why some call Atitlán the “eighth wonder of the world.” But to get there we had quite a day ahead of us. Leaving Antigua to the north, we yet again fought up Guatemala’s signature steep ascents, accompanied by volcanic vistas, truck traffic, and blistering heat when the wind wasn’t blowing gritty dust directly into our faces. After a few too many hours of this, we finally turned off the main highway and onto the old Antigua-Atitlán road – a welcome respite that brought us right into the hills surrounding the lake. 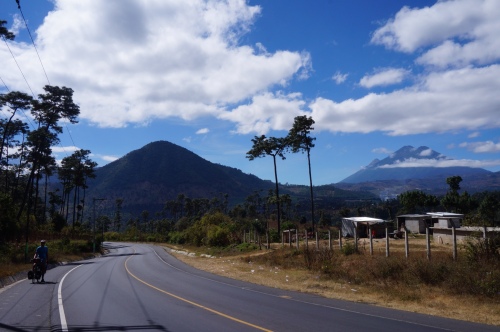 Just another day, riding up and down and around in the land of volcanoes.

END_OF_DOCUMENT_TOKEN_TO_BE_REPLACED

We rode out of Belize from San Ignacio, entering Guatemala with our spirits soaring. This time around we didn’t have to deal with any official charging us nonsense fees bound for his own pocket. Instead the crossing was quick and painless, and in no time at all we found ourselves on the Guatemalan side of the border. The change of surroundings was astounding. After bumping along Belize’s questionably maintained road system for the past three weeks, we all of a sudden had a freshly paved, nearly car-free road stretched out ahead of us. We were so happy that we could have dropped right off our bikes and kissed the pavement!

END_OF_DOCUMENT_TOKEN_TO_BE_REPLACED

After nearly seven months spent cycling all over Mexico, we were rewarded with a final few hours of blissful riding on the way out. For some crazy reason the wind decided to make a complete U-turn and shift from the grim headwind of the past month to a lovely, welcome tailwind. In no time at all we were at the border with Belize, looking forward to an early end to this Christmas Eve’s ride.

Mexico pulled out all the stops a few miles north of the border. Please stay! We have beaches, pyramids, and elephants! What more could you need?

END_OF_DOCUMENT_TOKEN_TO_BE_REPLACED

After our long detour through the hilly southern reaches of Chiapas, we were eager to reach Palenque and its famed ruins. The ancient city of Palenque is situated high upon a hill, giving it a commanding view of the expansive flatlands of the Yucatan peninsula to the east (modern Palenque town sits in the valley at the foot of that hill and is swelteringly hot – the ancients got it right.) The ruins themselves were well spread out and covered everything from pyramids to the obligatory ball parks. And if you don’t know anything about these ball parks yet, let me tell you. Apparently the ancients used to play some kind of hipball where they tried to maneuver a rubber ball through a vertical ring. Whoever scores first, wins, and the losers get sacrificed. Pretty harsh if you ask me. 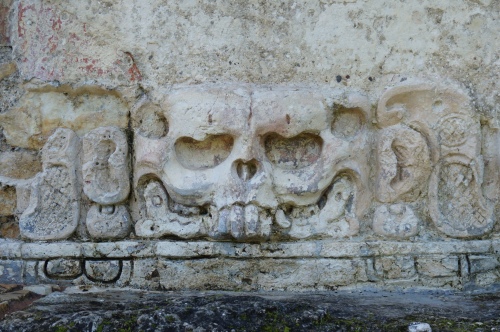 This creepy rabbit demon welcomes the intrepid visitor to Palenque…

END_OF_DOCUMENT_TOKEN_TO_BE_REPLACED

Alex decided that she wanted to celebrate her 25th birthday with a hot shower and a good meal, so after Salina Cruz we hopped on a bus headed for Tuxtla Gutiérrez, the capitol of Chiapas state. This would also help us avoid the dangerous winds that pummel the Isthmus of Tehuantepec (Mexico’s narrowest point) all through November and December. Our decision was affirmed by the fact that the route between the two cities was lined with hundreds of wind turbines – the first we’ve seen in Mexico. We were glad for the chance to avoid getting blown off the road and make some fast kilometers.

Unfortunately, when we got to Tuxtla Gutiérrez we quickly found out that we should skip town ASAP. Loud, dirty and thoroughly blah, there was really nothing that could make the city worthwile for us. So after just one night in town we packed up and got out of there in favor of the highly anticipated city of San Cristobal de las Casas. That day was pure grind, a steady climb of about 40 kilometers and over 6,000 feet. The most interesting bit came at the beginning, when we passed the toll booths that mark the start of the cuota. Rather than the policemen we usually see stationed there, the place was crowded with civilians wearing sunglasses and bandanas to hide their faces. They brandished sticks as makeshift blockades, carried paper signs with prices written on them, and held out tin cans to passing cars. Drivers deposited money into the tin cans and bypassed the bored-looking toll booth attendants completely.

END_OF_DOCUMENT_TOKEN_TO_BE_REPLACED

After a less than inspiring stint in Oaxaca, the way out of town was somewhat of a relief. It has rarely felt better to be back on our Long Haul Truckers with the road rolling away beneath our wheels and a favorable tailwind at our backs. Our departure from Oaxaca signaled a marked change of pace: the colonial heartland of Mexico lay largely behind us, and the rural landscapes and steamy jungles of the coast awaited. The rolling hills and country views were so refreshing, in fact, that we kept on pedaling on until nightfall.

When the time came to look for a campsite, we found ourselves close to an enormous construction area where a new highway was in its early stages. This seemed rather inviting but it was still crawling with construction workers, so we hemmed and hawed for awhile before finally deciding to go ask someone if it was okay to set up camp. For some reason we always expect the worst from these requests, despite the fact that we are rarely met with a no. This time around, the man we asked acted like it was the most normal thing in the world for two dusty güeros on bikes to ask about camping at the construction site. Without further ado, he led us to a secluded spot and reminded us that the next day was Sunday, so there was no need to worry about workers coming in the morning. After setting up our tent, a night watchman named Fernando came over to introduce himself and reiterated that our night would be “muy tranquilo.”

END_OF_DOCUMENT_TOKEN_TO_BE_REPLACED

In the interest of avoiding traffic-induced death, we made the easy decision to bypass Mexico City and instead reroute to nearby Puebla. This part of central Mexico is choked with highways and suburbs, and despite our efforts to avoid busy roads the way into Puebla was one of our more nerve wracking days on the bike, with heavy truck traffic and a conspicuously absent shoulder. At least the adrenaline rush helped us make good time and, unlike the road in, the city itself was a joyous surprise.

We began our stay with a beeline to the nearest bike shop, which turned out to be a slam dunk. Due to some jostling of the bikes at the border and really unfortunate rivet placement, Alex’s Brooks saddle had been causing persistent pain in the booty area ever since we entered Mexico. Four months later, we were still looking for a solution and Alex’s patience was wearing thin. As a portent of good things to come, we only had to consult two bike shops in Puebla before we finally found her a new saddle! The winning bike shop was a breath of fresh air in that it carried several brands of bike gear, whereas most Mexican bike shops have a relationship with a single manufacturer. The owner was incredibly helpful and spoke enough English that we could muddle through explanations of butt pain and seat rail length with minimal pantomiming. He insisted on taking a photo with us after we bought the saddle, and promised to help us with any other issues that came up free of charge. 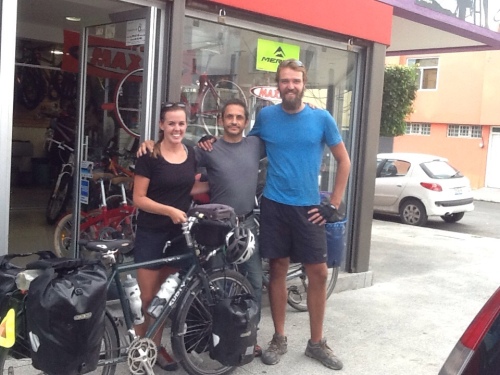 Unfortunately, there seems to be no market for used Brooks saddles in Mexico.

END_OF_DOCUMENT_TOKEN_TO_BE_REPLACED

Note from Alex: This post marks a big change of pace for us. Namely, the end of wedding season. In its brief six month lifespan, this little adventure of ours has been punctuated by not one, not two, but three weddings. We promise we’re not crazy. These celebrations of family and friends as close as family have sent us flying every which way across the globe – Germany, Seattle, and North Carolina – for little snippets of home, comfort food, and faces of the people we love. But now that the last of the weddings has passed (with undeniable flair, congratulations Heather and Adam!), we can honestly say that we have no idea when we’ll be back in our respective home countries. Which is both terrifying and thrilling. One might say… we plan to roll with it.

After an unanticipated week soaking in the many pleasures of Jalpan, we eventually had to say goodbye to Rodrigo and his hotel-to-be. The road was calling out for us again. The ride out of Jalpan could have been a real struggle, with 2000 meters of climbing to go in less tnan 50 kilometers. In other words, tears and pain for both of us. But Rodrigo came to our rescue again and agreed to drive us to the top of the mountain range, aptly named Puerta del Cielo, the gate to the sky. We said adios to the dogs and clambered into the truck, climbing into the fog-laden mountains as the temperature plummeted around us. Once we had reached the top, we bid farewell with hugs all around and began a steep, brake-squealing descent back back down into our good old friend, the desert. 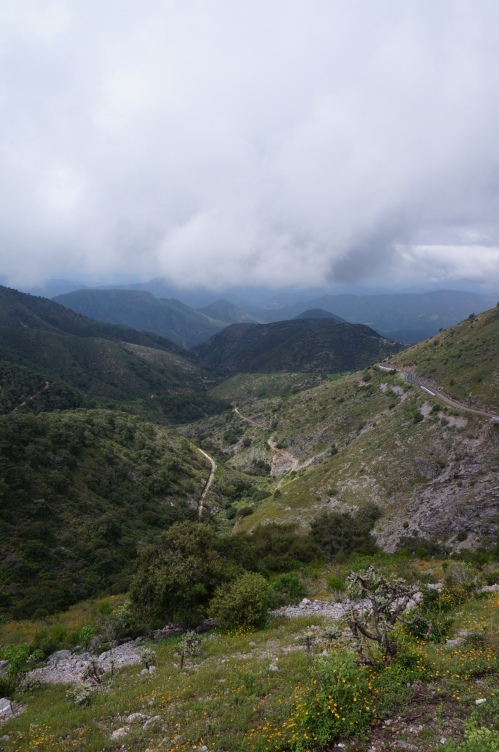 END_OF_DOCUMENT_TOKEN_TO_BE_REPLACED

After a few relaxing days in San Miguel de Allende, we parted ways with Arpi and Zita, with them heading south and us heading north. Due to a late start, some headwind, and a few painful ups and downs, we didn’t arrive at our destination until around sunset. The small town of San Diego de la Union was bustling with people in suits, which at first take was pretty odd. We then heard that the state governor was in town (hence the suits) and settled down on a bench to scope out what appeared to be free food being offered in the plaza. Free food! Unfortunately, before we could capitalize on the opportunity, three little kids swarmed us and started asking questions about our bikes, our trip, and my height. The middle kid, a four year old boy, kept standing at my feet with a huge grin on his face, emitting a high-pitched squeal, and running away as fast as he could screaming with laughter – only to circle back thirty seconds later to begin again. Alex asked the kids why they were so excited and after receiving an answer she erupted in laughter herself. Apparently the kids thought I was Santa Claus! Looks like the scruffy beard is finally paying off.