We know, it’s been quite some time since the last update. We’ve just been way, WAY too busy sitting out the heat of the day for a whole month. Believe me, nothing is more exhausting than waiting for the temperature to cool down. Nonetheless, here is a little photo summary of our past month off the bikes in beautiful La Paz, BCS.

Instead of spending all our hard-earned pesos on a hotel for a month, we decided to rent an apartment. Casa Republica was nestled into a snug little complex in a residential neighborhood. It had everything we could ask for: laundry, showers, air conditioning, and close proximity to the beach. It also came with a few unexpected “perks,” including warring dogs on either side of us that barked all through the night and day, late night cockroach hunts, and the many chirping lizards that lived in our heat pumps. But all in all, it was a great place to relax and recharge from several months on the road.

Jacques Cousteau marked the turnoff to our street. We took that as a sign that we should spend as much time in the water as possible.

Jacques had a pretty good view. We were constantly reminded by the locals that he declared the Sea of Cortez the aquarium of the world.

Home base for all of our adventures in La Paz.

Some things at Casa Republica took awhile to get used to. Like the washing machine, which we had to fill with a hose. A very, very low pressure hose. 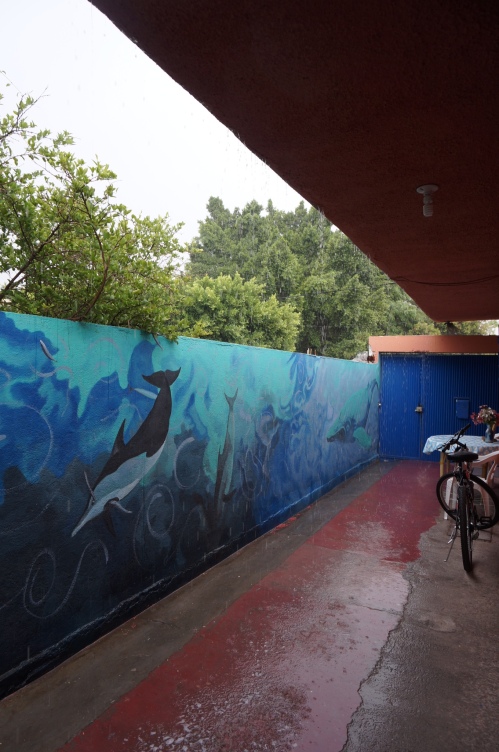 We got to La Paz just in time for the rainy season. After a month in the desert, this was heaven!

Alas, the rain meant a few afternoons spent inside. When it wasn’t raining in the afternoon, it was way too hot to be outside. We are now fully caught up on Orange Is The New Black. 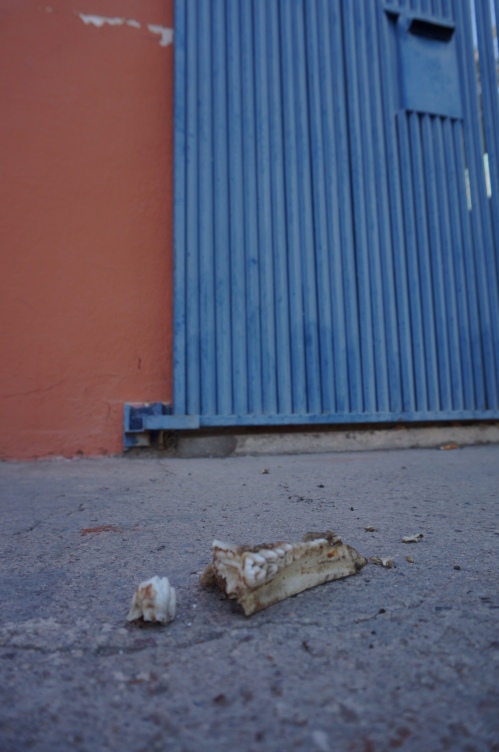 Once, we left Casa Republica to find a fresh jawbone waiting outside our door. 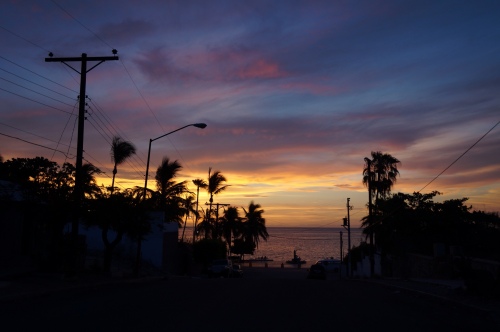 The view down Calle Republica, with Jacques in the distance.

After settling into Casa Republica, our next order of business was to buy snorkels and masks. We probably made fools of ourselves by jumping straight into the bay with our newly purchased toys, only to learn later that the locals would never, ever snorkel in the bay. Likely because the only underwater treasures to see were garbage, eel grass, and the occasional lost fish. Only after we splashed around in the bay for awhile were we given the insider scoop on the best snorkeling beach in La Paz, which happened to be adjacent to a failed condominium development a few miles down the road. We spent a few afternoons at Playa La Concha, alternating between snorkeling and waiting out the afternoon thunderstorms.

If we’d known about this place in advance, we might have tried to camp inside for free… 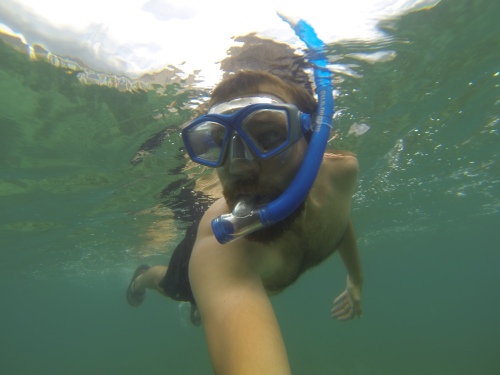 One of our top priorities for our stay in La Paz was to get dive certified. We figured if we have time on our hands, why not do something awesome with it? What we didn’t know at the time was that before we got to hop in the water we had to sit in class, listen to a lecture, and take a written exam at the end. Okay, that part was not as terrible as I just made it sound. Class and lecture meant watching incredibly cheesy educational videos and the written exam was a multiple choice test that was pretty much foolproof. (Note from Alex: Tom and I never took a college course together, so this was our first academic battle of the minds. No one who knows us will be surprised to hear that dive class became very, very competitive. Let’s just say that, in the end, one of us scored 100% on the written exam, the other a measly 96%.) After two days of dry time, we finally got to test our skills in the waters surrounding the incredible island of Espiritu Santo.

This is what waking up at 7AM to go diving looks like…for Alex.

Tom, of course, is far more chipper in the wee hours of the morning.

The trip out to Espiritu Santo takes about an hour and a half by boat. We later learned that about 50% of the cost of each dive goes towards gas.

The cliffs of Espiritu Santo are a trip back in geologic time. 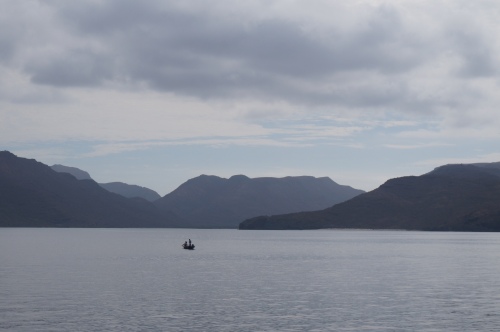 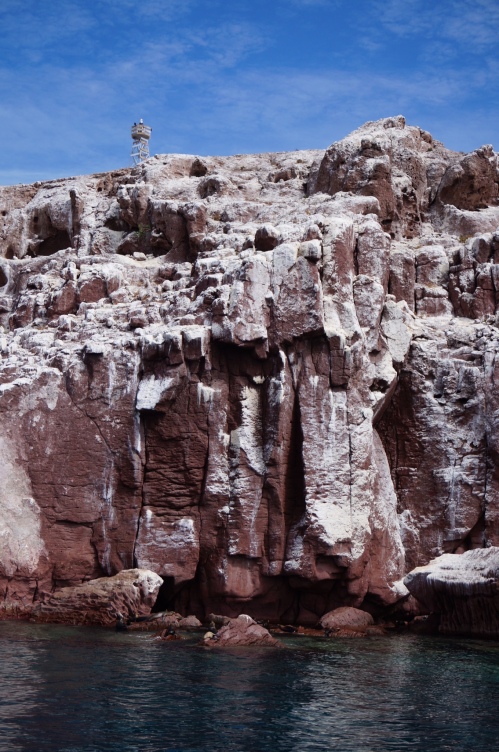 Our first dive site was at the base of Los Islotes, a sea lion rookery at the north end of the island. The white rocks are a testament to the many birds that also call Los Islotes home.

The site is famous as one of the only places in the world where you can actually dive with sea lions. A sighting! 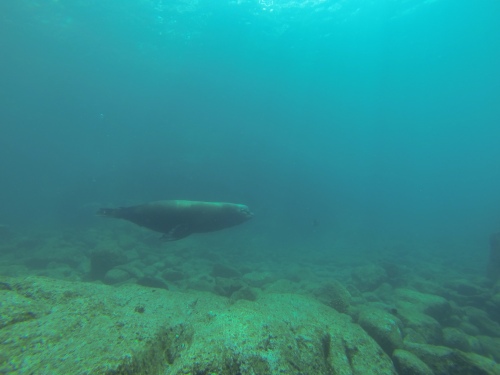 Unfortunately we were there at the height of mating season, when the males are hyper-territorial and the babies are too young to be in the water. We did get a few sightings though. 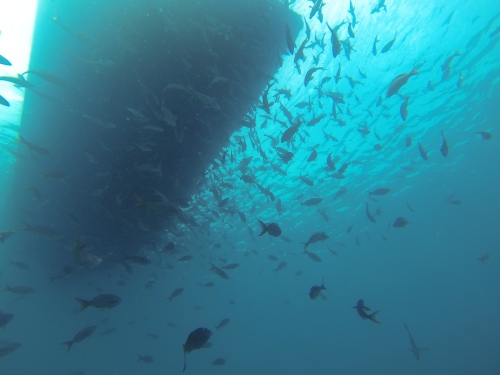 Smiling is hard with a regulator in your mouth, but smiling we are! 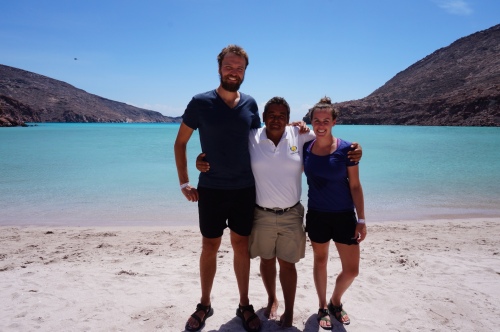 Beach paradise, and our lunch headquarters after each dive. 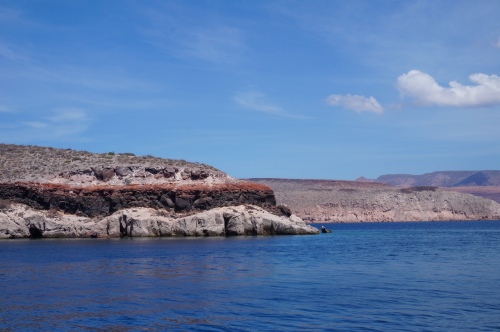 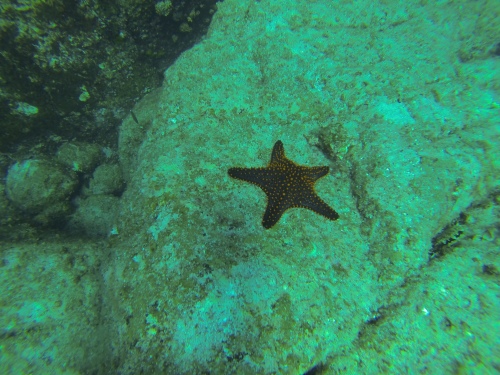 After our class was over, we decided to go for another trip to Espiritu Santo. Here are a few examples of the local underwater fauna. 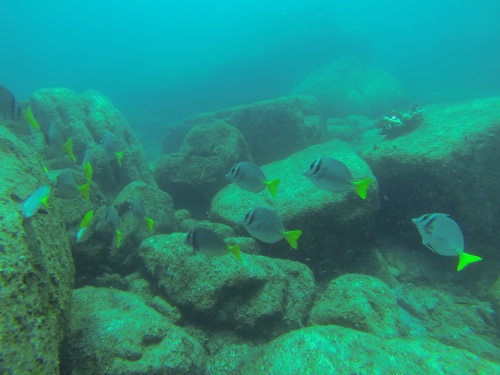 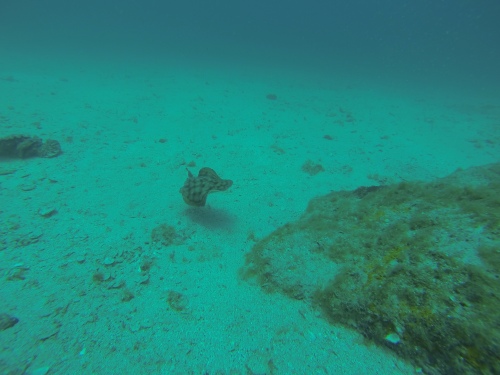 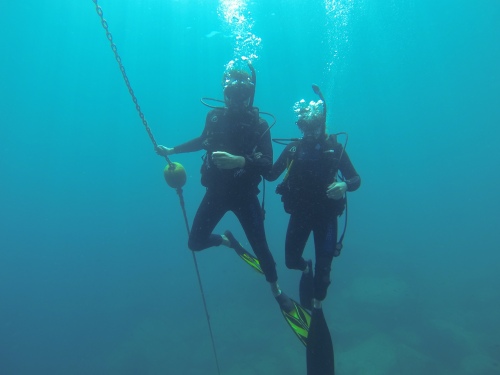