After a few days in the fanciest hostel we’ve ever stayed in, we saddled up again to head east out of Santa Ana. This time around we got to avoid the highway and instead meandered along beautiful winding back roads, almost completely devoid of traffic. It’s astonishing how much of a difference it makes to not constantly be honked at or passed by cars. At the end of the day we reached the lovely mountain town of Suchitoto, which our reliably unreliable guidebook called out as the go-to retreat for the fancier folks of El Salvador. While there weren’t any particularly thrilling sights from a cultural standpoint, the town’s laid back atmosphere and great street food were more than enough to convince us to hang around for a couple days. We even saw some familiar faces: Niels and Mariyana, the German couple we’d met in Santa Ana! They had passed our sweaty selves on the bus to Suchitoto and we ended up staying hospedaje again. (Guess you can’t complain about $7 per night.) What a very pleasant surprise!

The picturesque plaza central of Suchitoto.

Most houses in Suchitoto had this bird painted outside their door: “In this house we want a life free from violence against women.” 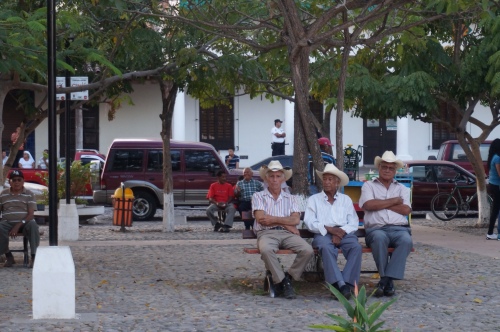 These three amigos were too picturesque to pass up.

Unfortunately, Suchitoto was our last respite for a long time to come. The ensuing week can be only be described as a grind. And that’s the nice way of saying it. We had to face the inevitability of the no good, very bad, terrible horrible Panamerican Highway, the famed road leading all the way through the Americas and our only feasible route option for the next week. (Note from Alex: We met a guy just north of San Francisco who boasted that he was going to ride all the way to Patagonia on the PanAmerican one day. For the record, that is complete and utter crazy talk.) 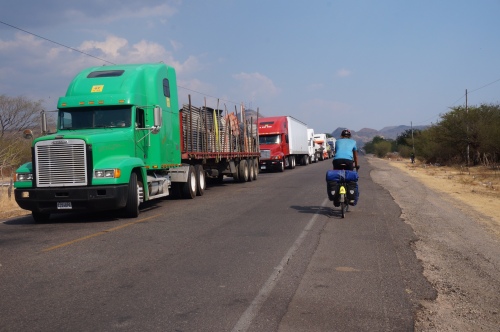 The quality of the PanAmerican really varies depending on where you are. At its best, it’s a multi-lane superhighway with a nice broad shoulder where you can almost forget to worry about being run over by the eighteen wheelers speeding by. At its worst, it’s a bumpy, potholed single lane of constant traffic – no shoulder – with trucks and cars and motorcycles whizzing by, honking, and belching exhaust fumes into your face. In El Salvador and on into Honduras, it was mostly the worst kind. I could bore you with details of the daily PanAmerican endurance fest, but do you really want to hear that? Wake up, caffeinate, pedal, curse the wind, eat, pedal, wonder why the hell we’re doing this anyways, cry, find a hotel, fall asleep immediately. Rinse (thoroughly) and repeat.

Two things stand out about our unremarkable final days in El Salvador. One, the roadside iguana trade. You really, really don’t want to be an iguana in El Salvador. You’ll be caught, your sad stubby little arms will be tied behind your back, and they’ll hang you on a tall wooden cross next to your sad iguana friends, your tail just barely brushing the ground, in what can only be called an iguana crucifixion. Then they’ll wave you with enthusiasm at passing cars and bikers, because what person on a bike doesn’t want to buy a frickin’ live iguana? Well, actually, we saw a local ride up and buy one such iguana. The iguana seller promptly slit its belly skin open so he could fold it in half, put it in a plastic bag, and the buyer attached it to his rear rack and set off towards home. We had to watch the twitching, very much still alive iguana struggle as the man kept pace just ahead of us for the next several miles.

The second highlight came on our last day in El Salvador when, as we were crossing an intersection in the middle of nowhere, I suddenly heard my name being yelled. I stopped and looked around in bewilderment, trying to find the source of the call. I didn’t have to look long, as a bearded Niels came running towards us, excitedly waving his arms. He and Mariyana had been dropped off there and were trying to catch a bus to the next beach town. That little encounter put both Alex and me in a better mood for the remainder of the day and helped take our minds off iguana torture. Oh, and if you lost count, that was the third time we had crossed paths. Would it be the last?

The next country on our trip was Honduras. Honduras has quite possibly the worst reputation in the Western Hemisphere due its record-breaking murder rate and high levels of gang-related violence. We weren’t too worried and had no plans to get close to any big cities, but nonetheless we felt okay about pedaling through the southern part of the country as fast as possible. While other cyclists we met had sped through in less than 24 hours, we – being the reckless folks that we are – gave it a whopping 48. I know, hardcore. As for the violence, we didn’t see or witness anything out of the ordinary. Just some good old fashioned headwind, sidewind, truck drivers out to make us pee our pants in fear of death by smooshing, and the occasional middle finger from kids on the side of the road. Charming. 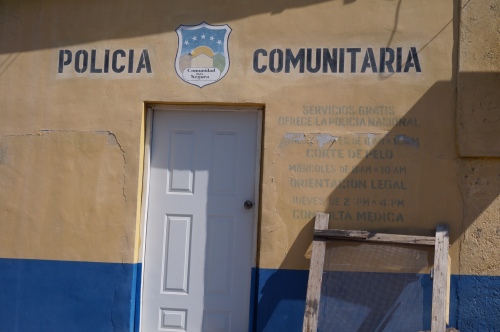 Among other services, the Honduran police offer free haircuts on Tuesdays.

Sometimes the trucks get hot too. 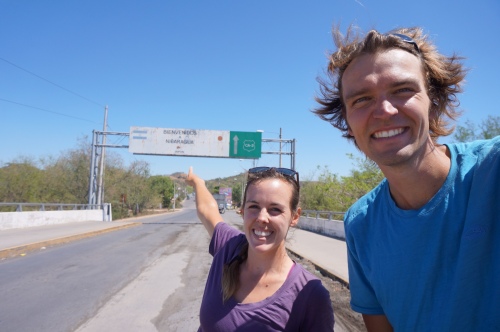 Welcome to Nicaragua, courtesy of Japan.

With Honduras behind us, we were plenty excited to get to Nicaragua. Alex especially, as this was the country that had first given her the travel bug at the tender age of 16. From the uninspiring border town of Somotillo, we set off on our first full Nicaraguan riding day and things quickly took a turn for the better. We were finally off the dreaded PanAmerican and had the immense pleasure of a sunny day, a flat, nearly car-free road, an epic view of smoking volcanoes in the distance, and a tailwind unlike any we’d had since Northern California. (Note from Alex: On top of that, the local friendliness meter ratcheted up a few notches, and people were calling out to us from their front porches and horses with greetings and shouts of “Andale! Andale!” It was almost like being back in good ol’ Mexico.) It was probably our best riding day in months. We were in such high spirits, in fact, that we set ourselves a new record, cruising more than 70 miles and into the city of Leon.

Compared to these guys… 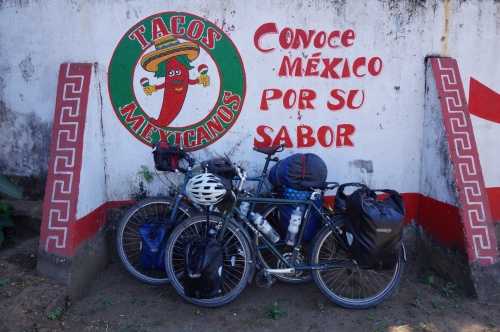 Continuing on the is this Mexico? theme, we even found a Mexican loncheria on our way into Leon.

With the sun setting, a friendly policeman gave us very, very detailed instructions on how to continue (straight) into Leon.

We got to spend two days in Leon, Nicaragua’s second biggest city, cultural capital, and liberal bastion. Unfortunately, we were pretty beat so our stay there is kind of a blur. What we do remember mostly consists of eating our way through various food stands and lounging around to absorb the cultural highlights of the city, starting with churches and ruins and leading to impressive murals depicting the city’s more recent revolutionary history.

Leon is known for being a center of political activism. This graffiti probably doesn’t need translation. 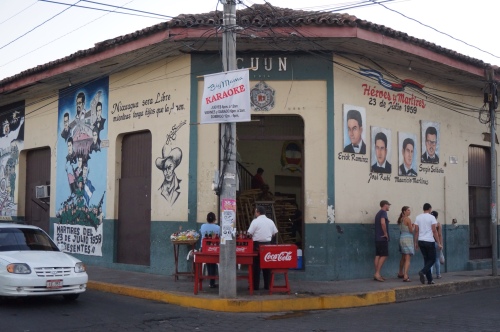 That perfect hour just before sunset. 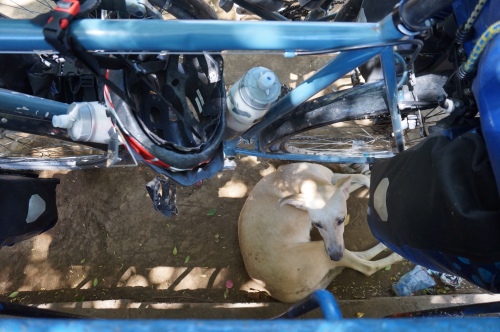 Now hear me out before you start calling us lazy schlubs! The short stretch of road from Leon to Managua, Nicaragua’s capital city, is a notorious pain in the butt. It’s a heavily trafficked monstrosity where the PanAmerican highway comes back into play, there’s no shoulder, and any semblance of orderly traffic flow that can possibly be said to exist basically dissolves into one big traffic jam. Everyone we talked to only had the worst things to say about that road, and plus we would be facing 30 MPH headwinds the entire way. Why make ourselves miserable when a bus will get us there in an hour? Honestly, it was an easy decision. And who did we find on our way to the bus terminal but our good pal Niels! This time, at least we got a photo to commemorate the occasion. 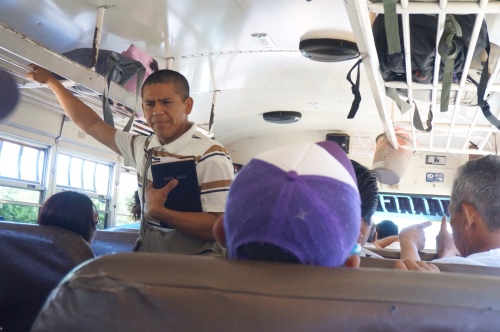 Really guys, this is the last bus.

The bus brought us past Managua and on to to Masaya, a cozy city beautifully located at alongside a volcanic lake. A giant, greasy pizza that was actually halfway decent (a real feat in Central America) made the end of the day that much sweeter. But the pizza-fueled happiness was short-lived. The next morning I woke up with a pounding headache and feeling as weak as a sheet of wet paper. I even told Alex that I wasn’t feeling good, which never happens. Luckily we only had a short riding day to get to Granada. With my head feeling as if somebody had just played a drum solo on it we found a charming hotel and I fell asleep hoping to feel better the next morning. 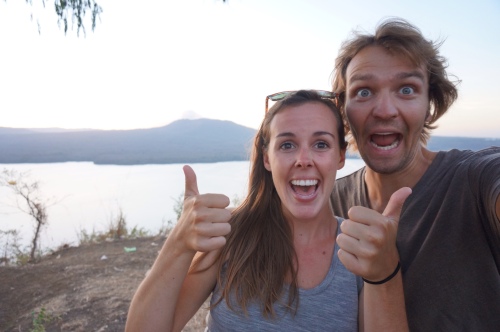 Believe or not, the following day was even worse. On top of general weakness, I was running a high fever, had a brutal headache, and rivers of sweat were just streaming down my forehead. Alex, being the rational one in this situation, quickly came to the conclusion that it was time to see a doctor. (Note from Alex: Despite Tom’s protests of “I’m not sick, really, I’m fine, I’m not sick.”) We walked a few blocks to the free government clinic, where we got to wait outside for several hours on a wooden bench alongside about 20 other sick people. At one point I was about to pass out, which was when the doctor finally brought me into her office, put me on an IV drip, and unsuccessfully tried to talk to me in Spanish. The diagnosis? Either dengue fever or the mysterious chikungunya, both diseases transmitted by mosquitoes.

Even worse than being felled by something called chikungunya – which sounds like some sort of Creole chicken stew – was the realization that there wasn’t a thing I could do about it. (Note from Alex: Also, when you use the powers of the internet to successfully diagnose your boyfriend’s mysterious disease on WebMD, decide to be responsible and go to the doctor anyways, and wait seven hours in the blazing Nicaraguan sun only to have your internet diagnosis confirmed and then told that there is nothing the doctor can do about it. That’s kind of annoying.) I was told to rest, wait it out, and drink a disgusting rehydration powder called suero that I had to mix into all my fluids. Believe me when I say you do not want to taste that stuff! 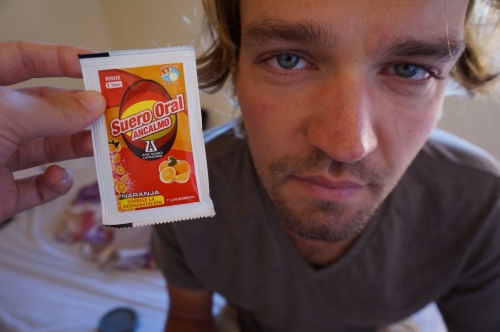 But most importantly, what would my being sick would mean for our progress? How long would we be stuck in Granada? And would I ever regain my strength? Stay tuned for answers to these questions and more in our next blog entry!

3 thoughts on “I’ve Got Chicken What-a?”