Our last morning in Oregon started with a bummer – the first flat tire of the trip. Oh no! Alex’s rear tire got punctured by a staple last night (don’t ask me why there are staples lying around on the roads in Brookings) and we had to apply a quick fix. Within a couple minutes the tire was off, old tube out, new tube in, and we were good to go again. Five miles separated us from the state border, but that was no obstacle for us. Hello California! 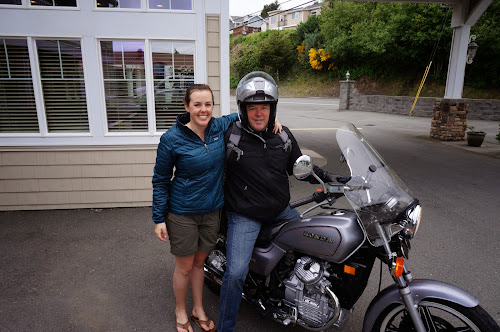 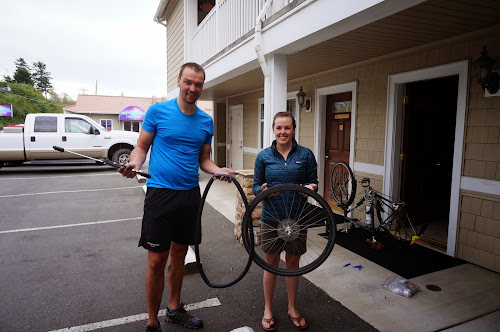 How do you change a tube again? 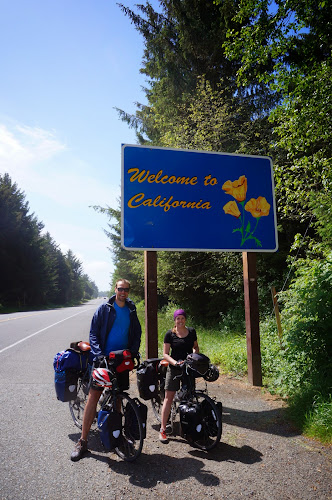 Onto the next state!

And then, at the state line, something miraculous happened. A sudden burst of energy made our riding easier than ever before. It was as if we sprouted wings and simply flew over the many hilly miles that lay in our path. Long story short, all of a sudden we found ourselves in Fortuna, California, a good 120 mile ride for the day. 120 miles in one day? We’ll take it! Who knew that a good night’s sleep in a real bed could make our daily mileage skyrocket so quickly… 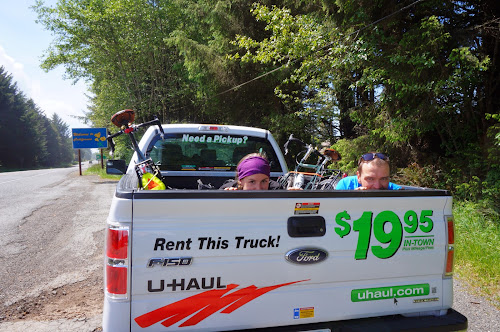 Okay, okay, we might have cheated a little bit and didn’t technically ride the entire way atop our trusty saddles. After a bit of quick math the night before, we figured out that in order to reach Los Angeles in time to catch our flight to Germany, we would need to call upon a little extra horsepower. Scott had initially planned to motorcycle down to Crescent City to pick up a remtal truck, but when he got there the truck he’d reserved wasn’t there, and apparently never existed. So Alex and I swiftly used our good old friend Google to find the closest truck available, and voilá, an hour later, U-Haul came to the rescue.

Riding in that truck felt really weird – a whole lot different than slowly moving along on our bicycles. The speed made our ride to Fortuna feel more like flying in a spaceship than driving. But, the change of pace enabled us to stop along the way and absorb some of the local cultural hotspots, not least of which was the Trees of Mystery (cue spooky Twilight Zone music). We had seen signs for this roadside attraction since Central Oregon, and were thrilled to receive a hearty welcome from a 50 foot statue of Paul Bunyan and his good ol’ ox Babe. Totally worth it. Chocolate fudge made the whole thing even better, om nom nom. 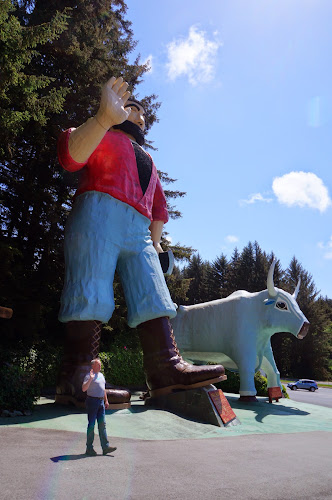 The similarities are striking… 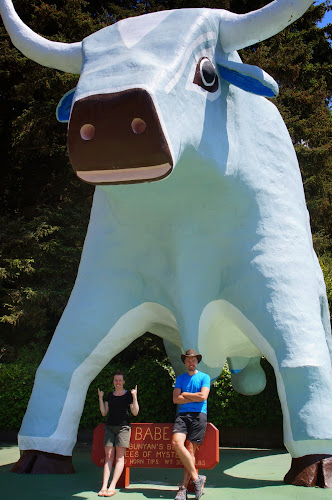 …and Babe isn’t too bad either… 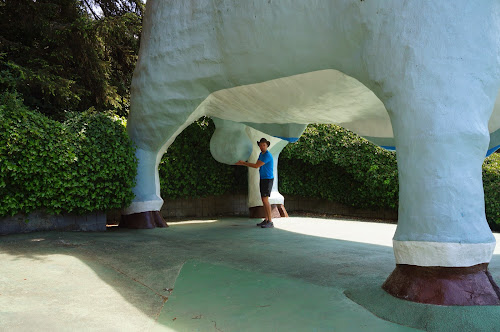 …any which way you look at him!

Our next stop was truly enlightening. Lady Bird Johnson Grove, amidst the depths of the mighty Redwood National Park, was a sight to behold. (And since the entrance to the grove required ascending a steep, two mile long hill, we were pretty thankful to have the truck.) The incredibly tall trees, stunning beauty, and dense quiet of that natural spectacle left us speechless and in awe. Words don’t suffice, and neither do pictures, but we took our best shot. 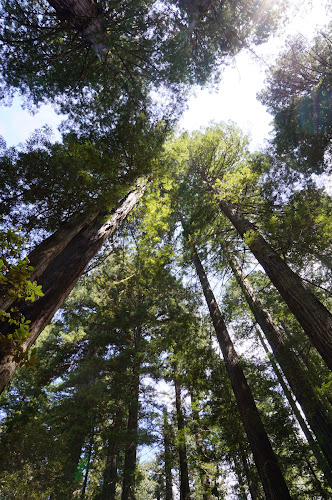 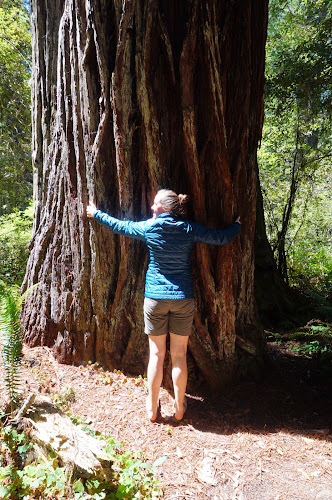 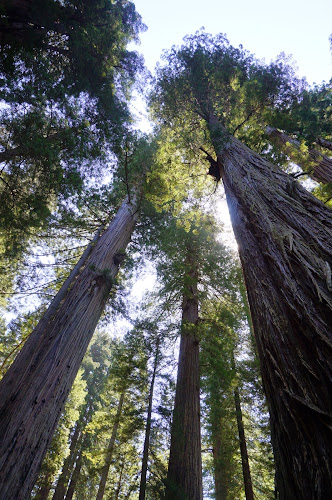 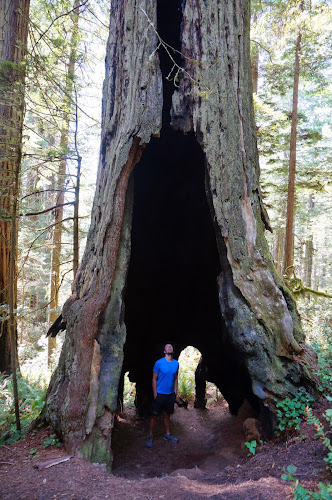 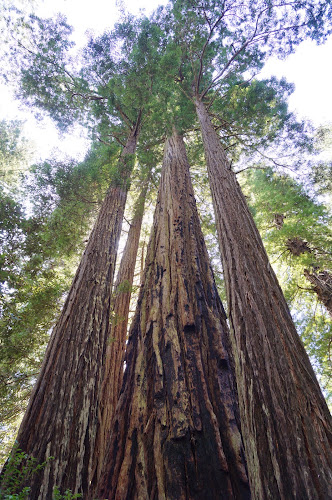 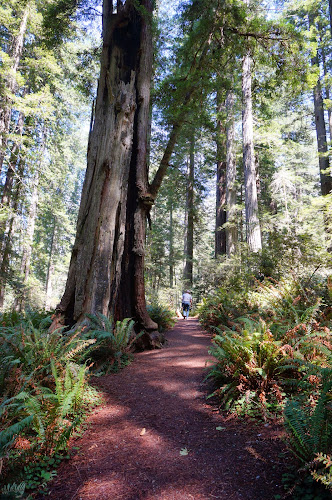 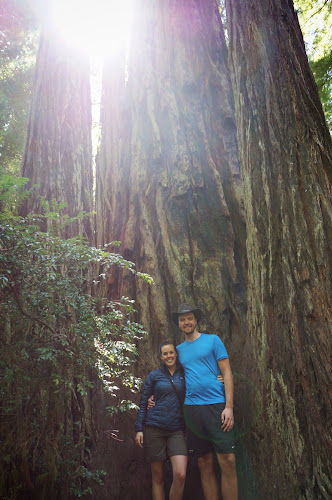 Afterwards, Alex insisted on driving a zig-zagging route through Eureka to have a look at the supposedly marvellous Victorian architecture of the town, as recommended by our cycling guidebook. I don’t know whether the author was on some kind of drug or even on the right continent but there was next to nothing in Eureka that could be called a “masterpiece of Victorian design.” (Note from Alex: For the record, I contest this point. There were at least five super fancy Victorian homes…but certainly not the 50 claimed by the book. Tom and my dad, who never pass up an opportunity to showcase their witty charms, used the not-so-Victorian architecture as fodder for a lot of hi-larious jokes for my listening pleasure).

Dinnertime rolled around, and after driving around the tiny town of Fortuna for about 45 minutes we realized that mediocre Mexican was our best bet. Lots of refried beans later, our day ended with Scott dropping us off at the local RV park (apparently a former KOA). Yet another goodbye followed as Alex and I settled down for our first night in California. A huge thank you to Scott for all of his help and support in the past two days – we had a great time! 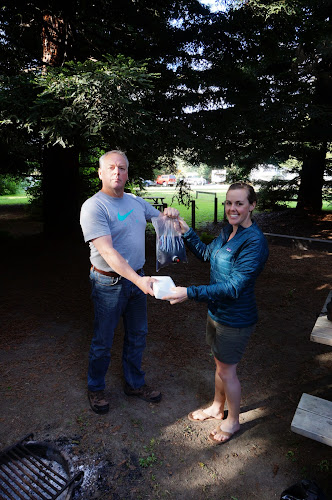